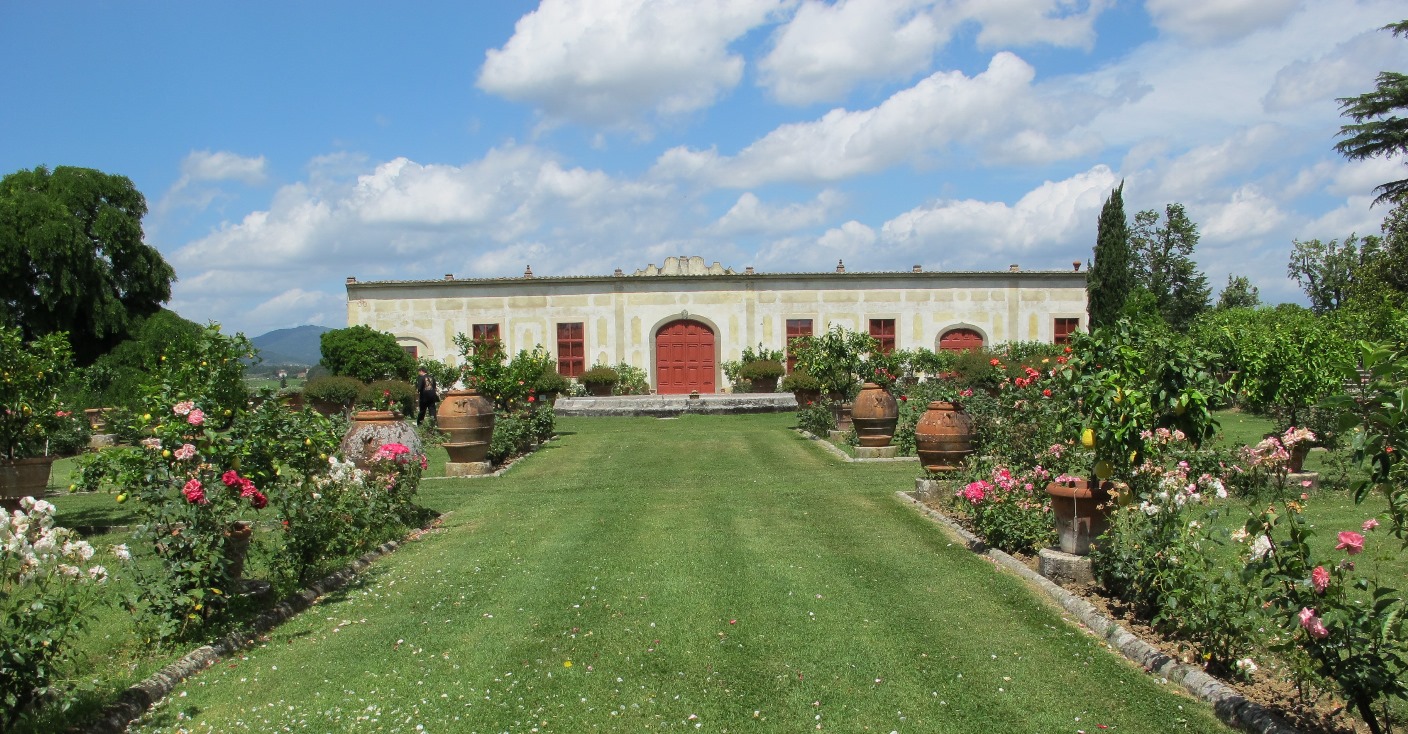 DESCRIPTION AND ANALYSIS OF THE WORK AND STATE CONSERVATION
The main core of the villa was built in the fourteenth century by the Panciatichi family. It stands in the Valley of the Ombrone on the northern slopes of Mount Albano, Pistoia. A place of strategic importance due to the historic meeting between Duke Alessandro de’ Medici and the Emperor Charles V during a hunt in 1536. Ownership passed to the Medici in 1583 as Francesco I needed to increase land ownership in the area for the Grand Duchy.

The location was particularly favourable as the hunting grounds confined with those of four important estates, Poggio a Caiano, Artimino, dell’Ambrogiana and Montevettolini, in a satellite system of villas around Monte Albano. It was restored by Bernardo Buontalenti, the court architect, and retained great simplicity compared to other villas. The building is rectangular in plan, with two protruding wings at diametrically opposite corners of the structure. There is no ornamental garden but the villa was surrounded by a large park which has, today, been severly encroached upon by the suburban development of the town of Quarrata.
A special feature of the villa was the lake, square in form and with walled banks. It has a shelter on one side designed by Buontalenti in collaboration with Davide Fortini. This was used for fishing from and for the hunting of wildfowl. Building was completed in 1585. (The lake t is now filled in.) In 1645 the following Grand Duke Ferdinando I de ‘Medici assigned it to Don Antonio, the illegitimate son of his brother Francesco and Bianca Cappello. Ferdinand II sold it to Pandolfo Attavanti, who transformed the former hunting lodge into a villa with an Italian style garden complete with geometric parterres bordered by box hedges. In 1715 the interior of the villa was decorated with frescoes by Giovan Domenico Ferretti.

CRITERIA AND METHODOLOGY OF THE INTERVENTION FOR RESTORATION
The wall paintings date back to the seventeenth century. The painting technique used was that of the Baroque period i.e. with large areas in buon fresco, continued in mezzo fresco, and finished with details executed directly on the dry surface. The paintings represent architectural views in perspective and scenes from mythology with monochrome coats of arms above. The paintings were affected by the settling of the main structure and the consequent loosening of plaster.
Large cracks in the vaults ran into a dense network of hair line cracks indicating the state of separation between the preparatory layers of plaster and between the colour and the plaster. The restoration operations started with a preparatory sealing of micro lifting of the paint surface with the application of Japanese tissue paper and demineralized water. By injecting fixative of aqueous emulsion with a syringe and blotting the lifting areas with a damp sponge in such a way as to re-adhere the loose parts to the support, a return of the smooth surface was achieved.

An initial consolidation, aimed at protecting the fresco, was carried out by cleaning various cracks and holes in the ceiling, and injecting them with pozzolan mortar where necessary. Initially the mortar was applied in a more liquid state to ensure deeper penetration. Then the gaps were sealed with mortar of the appropriate grain size to harmonize with the original, in order to reinforce the whole. To further reinforce the repairs, we applied two layers of Japanese tissue paper along all cracks, to prevent any movement of the vault and any eventual loss of colour that might otherwise be caused by the use of electric drills and mechanical vibrations during work on masonry.

The structural restoration works completed, a double-check on all the ceilings and further consolidation work was carried out in different areas. The preliminary consolidation concluded, cleaning work continued. This was done with the application of Japanese tissue paper applied with demineralized water and by painting on it surfactant-biocide with a brush and left for about thirty minutes. This to eliminate mold and moisture stains.  Some over painting which compromised an easy reading of the work, was lightened with methylcellulose wraps and ammonium carbonate and rinsed with demineralized water. The final step was to wash the entire painted surface with a disinfectant product that would block the further formation of molds.

Fillings were performed with mixtures based on hydraulic lime and river sands selected in different grain sizes mixed with a calcium caseinate solution at 5%. Stainless steel spatulas were used to apply it, after prior dampening of the contact surfaces. Following this the edges were cleaned with moistened sponges so as to obtain a gentle slope away from the overall surface level. On the walls and stucco of the staircase, stratigraphic tests were carried out that have allowed the identification of the original level corresponding to the painting. Restoration work was completed with retouching in basic temper and pure mineral pigments. 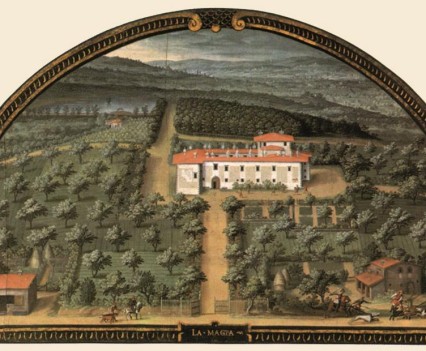 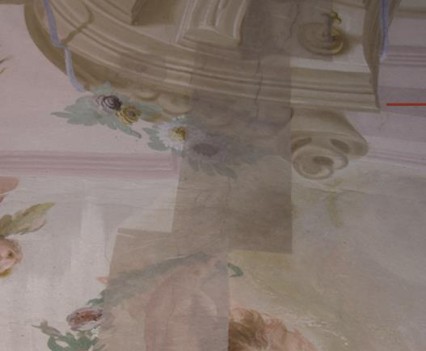 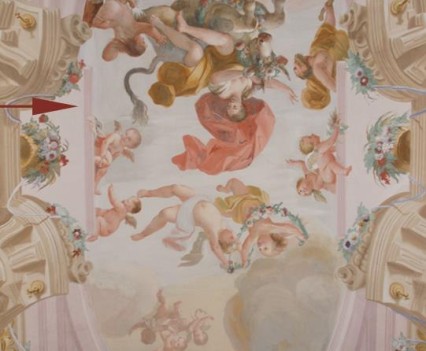 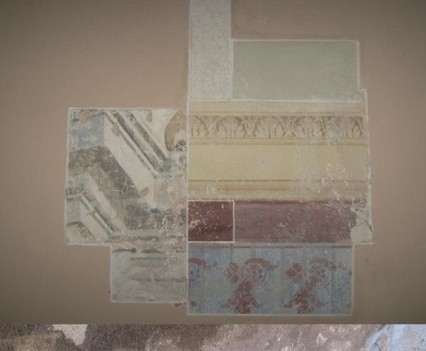 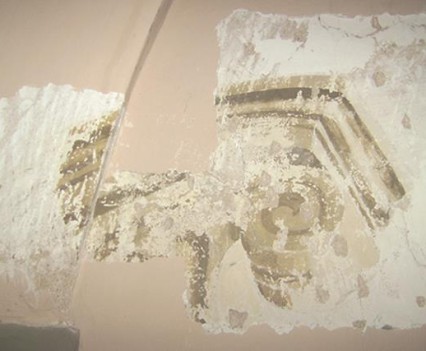 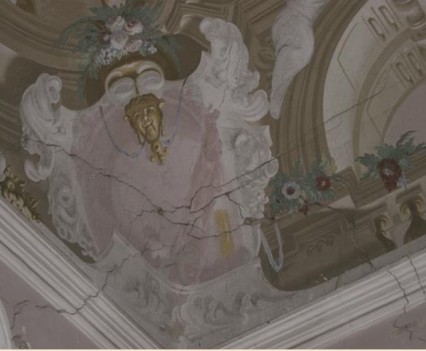 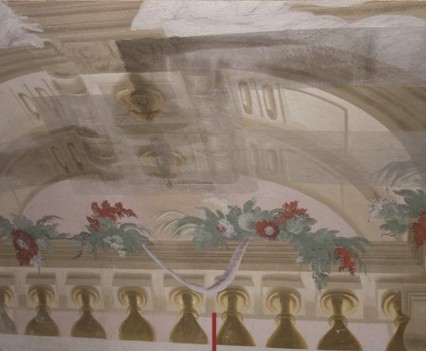 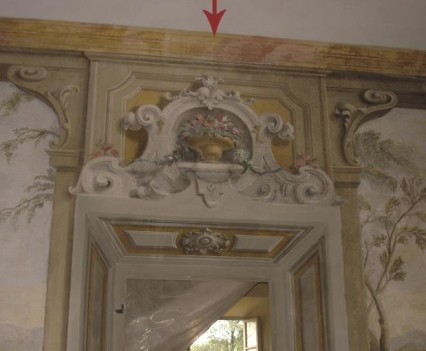