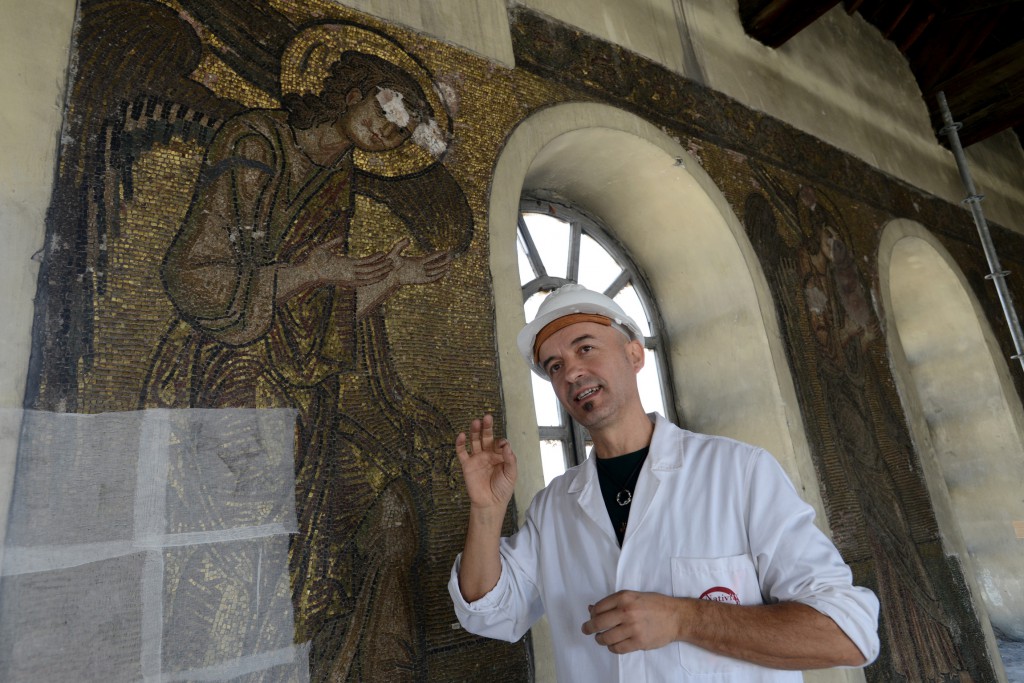 The Record – Restorer: Working on Church of Nativity like touching piece of history

The Record – Restorer: Working on Church of Nativity like touching piece of history

Helping restore the roof of the Church of the Nativity is like touching a piece of the beginning of Christian history, said an Italian restorer who is heading work on the first phase of the long-awaited repairs.

“I am not a practicing religious person, but working on this church is very emotional,” said Marcello Piacenti, 53, the on-site project manager and a restorer with his family’s company, Piacenti Spa, which began the work in September. “I have restored many old churches in the world, but when I arrived here I knew I had arrived to the center of everything.”

More than five years in the planning and researching, the restoration of the church’s wooden beams and lead roof and its 38 windows represents the beginning of an ambitious project, said engineer Imad Nasser, technical representative of the Palestinian Authority’s national committee for the restoration of the Church of the Nativity. Nasser said that, two years ago, it was estimated that the repairs would cost $15 million, not including the construction management fees.

Repairs are being done in several phases, as the funds become available, he said, with essential repairs such as the roof given priority. The next stage will include the completion of protection of the stone facade of the external walls once the funds are acquired, he said, noting that more than $2.7 million is still needed for that phase.

A member of the Franciscan order noted that members of the Catholic, Orthodox and Armenian churches, all of which have a presence at the Church of the Nativity, have agreed not to speak to the press in order to avoid any conflicts over sovereignty issues.

Though much care has been taken not to disturb the visitors and the church, Christmas pilgrims this year are being met with metal scaffolding, inside and outside, and protective wooden coverings around the marble columns inside the church.

Piacenti brought special steel scaffolding from Italy to assist in the repair of the wooden beams inside the slanted ceiling.

It will take the team of 10 Italian and five Palestinian workers about a year to complete their work, estimated Piacenti, whose grandfather began the family tradition of carpentry and restoration work. Piacenti and his four siblings made the tradition international.

Experts will analyze and study repairs throughout the restoration to assure the authenticity and quality of the work, he said.

The workers have already removed the wooden frames of many of the 50-year-old windows, some of which are pocked with bullet holes received during the intifada, when Palestinian gunmen holed up at the church and Israeli soldiers laid siege. The window frames will be replaced with Cyprus wood, and special glass that blocks ultraviolet light will be used for the windows to further protect the frescos and mosaics inside from the harsh Middle Eastern sun, said Piacenti.

The current windows are machine made and “are not good material,” Piacenti said, picking away at some of the rotting wood from one of the removed window frames. “But the wooden beams (from the ceiling) are from around the 1400s, from the time of Columbus, from … the Alps near Venice.”

Read the complete article on therecord.com.au