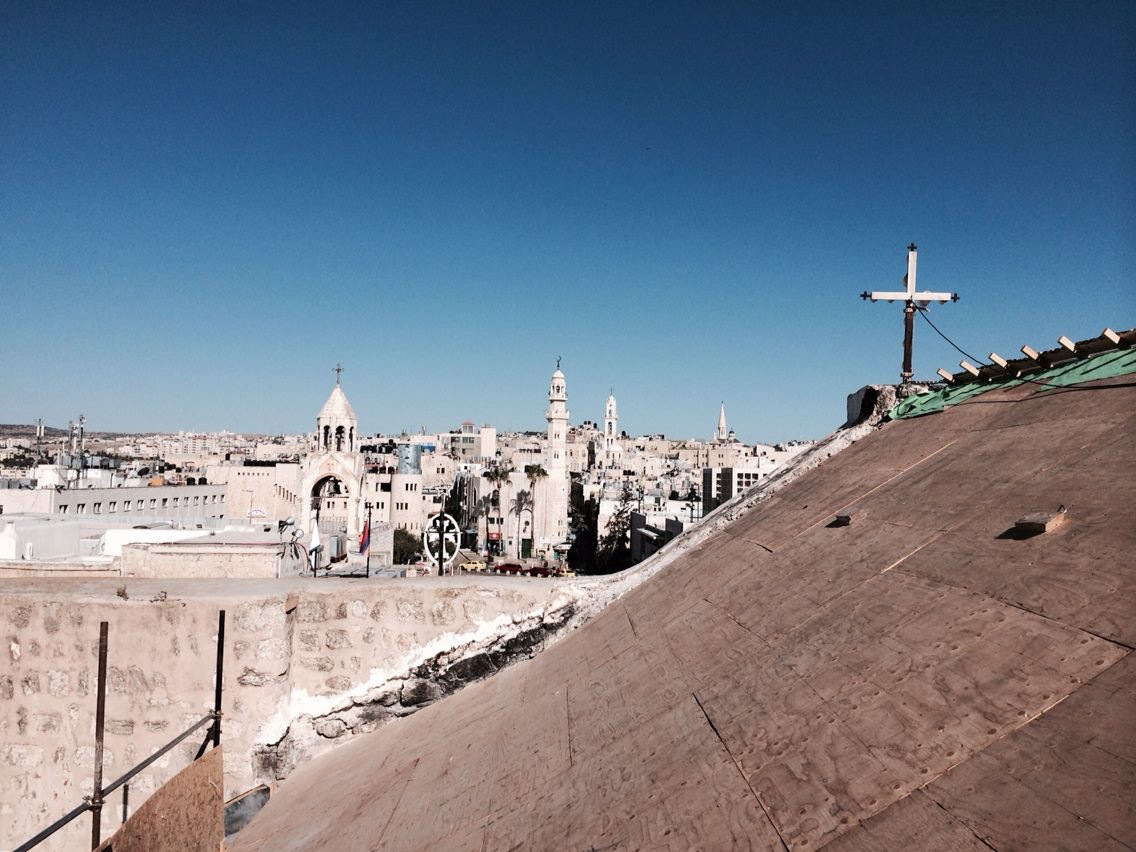 BETHLEHEM, WEST BANK – As visitors descend upon Bethlehem this holiday season, they will notice a different look for the Church of the Nativity, located at the traditional site of Jesus’ birth. Wrapped in scaffolding, the basilica is undergoing a much-needed face-lift after 600 years.

Experts say water is leaking through the roof and threatens to cause serious damage to mosaics and other priceless items.

Project manager Afif Tweme said the first stage of the project began in September and is addressing the most pressing issues: the rooftop and windows.

“The water also has a bad effect on the plastering surfaces, on the mosaics, on the floors, on the frescoes,” said Tweme, who works for a Palestinian engineering consulting firm.

The companies carrying out the work are obliged to minimize any disruptions to visitors and make sure that pilgrims can “pass freely inside the church and safely,” he added.

Bad winter weather is making the work more urgent. The heaviest snowfall in decades blocked roads across Israel and the West Bank on Saturday, while torrential rains flooded areas of the Gaza Strip. Some 30,000 households were without electricity, nearly 9,000 of them in Jerusalem. A government estimate put damage at $64 million.

Boaz Nechemia, a meteorologist, said 45 to 60 cm of snow had accumulated in the Holy City. “We haven’t had such a snowfall in some 70 years,” he said, noting that a meter of snow fell on Jerusalem in 1920.

The church is one of Christianity’s most visited and sacred shrines. Standing above the grotto where, according to tradition, Jesus was born, the church attracted more than 2 million visitors last year. But the building, with remnants up to 1,500 years old, has been neglected for decades.

Both the World Monuments Fund, a U.S.-based nonprofit group dedicated to protecting historic sites, and the U.N. cultural agency UNESCO have placed the church on their lists of endangered sites. A high-tech survey by a consortium of Italian experts in 2011 called for urgent repairs.

The city of Bethlehem is situated in a part of the West Bank where the Palestinians have self-rule. The Western-backed Palestinian Authority has taken the lead and is financing a great portion of the work, said Ziad al-Bandak, an adviser on Christian affairs to Palestinian President Mahmoud Abbas.

He said the government has provided $1 million, while an additional $800,000 is coming from the private sector. The rest is coming from European countries such as France, Hungary, Russia and Greece, contributing to the roughly $3 million in total needed for the first phase.

The work has been complicated by the sensitive relations among the three Christian denominations that share ownership of the church. The Roman Catholic, Greek Orthodox and Armenian churches have traditionally viewed each other with deep suspicion. They run the Nativity Church according to a 19th century codex, known as the Status Quo, which assigns responsibilities for upkeep that are jealously guarded by each denomination.

A senior church official said the three denominations would never have been able to reach an agreement on their own. But once the Palestinian Authority stepped in, all three churches accepted the decision.

The first phase, expected to last one year, is being carried out by an Italian firm that specializes in the renovation of historical sites. One by one, experts will repair the hundreds of wooden beams in the roof.

Giammarco Piacenti, the president of the Italian firm, said the rooftop was masterfully restored by Venetian carpenters in 1478. He said the project will be conservative and seek to keep as many of the original pieces as possible.

Aside from the roof and windows, other elements that will need repair in the future are the external facade, internal plastering, wall mosaics and paintings and wooden works, said Tweme. If funding is secured, the work could take four to five years.

The church was built in the fourth century by Saint Helena over a cave where the Virgin Mary is said to have given birth. What pilgrims mostly see today is the basilica church built by the Byzantine emperor, Justinian I, who ruled from A.D. 527 to 565.

The construction does not include the area that is the main focus of the pilgrimage: the place located under the altar crypt that hosts the 14-point silver star marking the spot where, according to Christian tradition, Jesus was born.