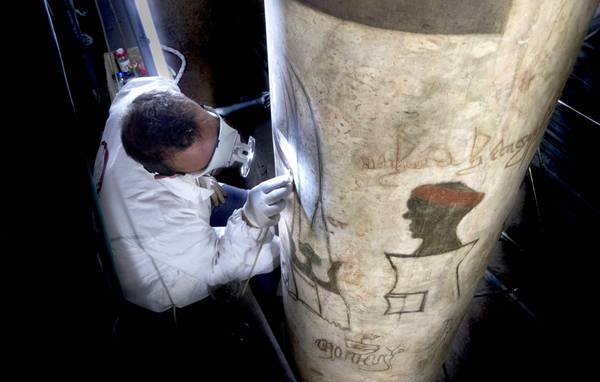 (by Massimo Lomonaco) BETHLEHEM – Restoration work at the Nativity Church in Bethlehem (West Bank) on the painted murals carried out at the request of Emperor Constantine and his mother Helen, that has been ongoing since 2013, has unveiled light blue and pink hues as well as shadows painted over 1,5000 years ago to decorate the church. The restoration is unveiling a minefield of treasures including a 900-year-old angel.
Restorers have suggested the blue was possibly used for cloaks or to paint the sky, the pink for faces and the dark shades for backgrounds and also for the cloaks.
But the surprises that have come from the renovation work – promoted by the Palestinian presidential committee of Ziad Al Bandak together with three Christian confessions and 30 international sponsors – are not over. During the restoration of mosaics on the floor dating back to 330 AD, some mosaics that were not unveiled during a 1934 campaign carried out by William Harvey were discovered. They represent animals and fruit. As work continues – said Giammarco Piacenti, whose company is in charge of the restoration, with the participation of 200 specialists and over 60 companies, universities and professionals – the bases of the columns of Justinian and the remains of the walls of the first church of Constantine will also be visible.
With archaeologist Alessandro Fichera from the University of Siena, work has started to unearth the areas close to the three large trapdoors that until today displayed the mosaics for pilgrims.
The restoration of the columns instead unveiled the colors of paintings dating back to the era of the crusades of the Kingdom of Jerusalem (1099-1187).
The Saints painted are in the Oriental and Western tradition and under the images, writings and drawings have emerged of helmets with animals that probably tell the story of the military campaigns of Crusaders during their passage in Bethlehem. The analysis of colors – continued Piacenti – showed precious materials like lapislazzuli used in large quantities behind Saints and the painting was directly realized on columns in ‘Sleibi’ stone, from Bethlehem, with yellow and red colors.
The stone was used by the artist – or artists – as a background. ”The satisfaction of the team is great. This work – concluded Piacenti – has led to marvelous historic, artistic and spiritual discoveries in a place that exudes an energy that fills the heart”.

Read the complete article on ansamed.info